The Theaters of Max Reinhardt 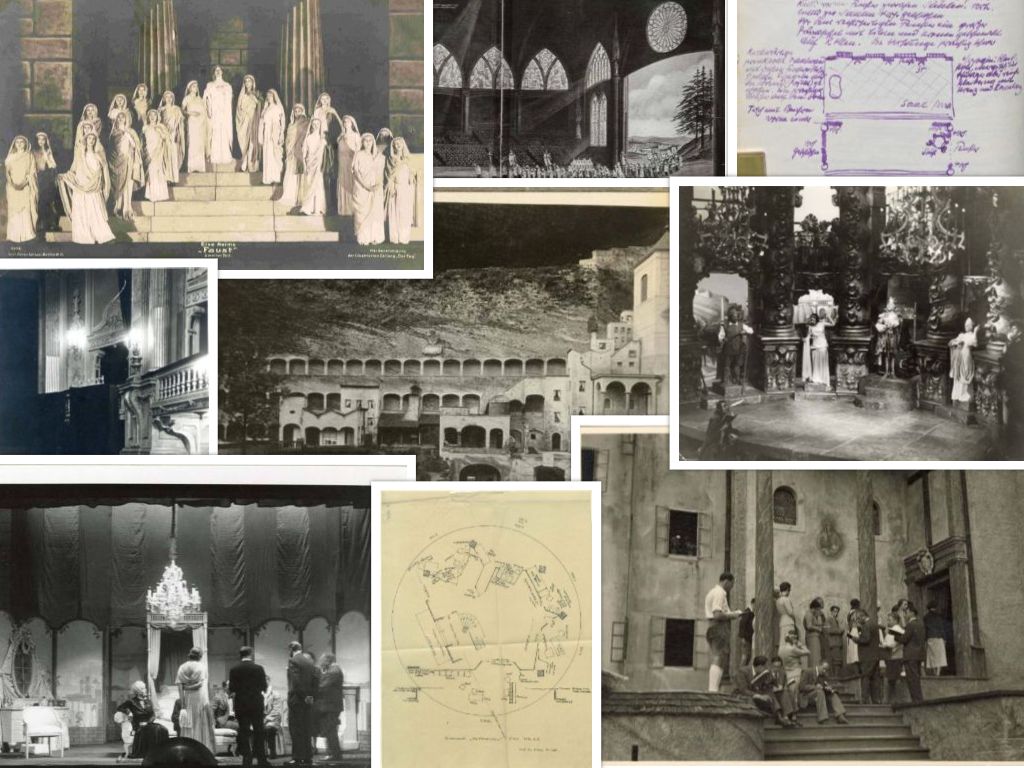 The Schloss Leopoldskron was commissioned as a family estate in 1736 by Leopold Anton Freiherr von Firmian (1679-1744), Prince Archbishop of Salzburg, in part as an attempt to re-establish his family’s social standing after his expulsion of over 22,000 Protestants from Salzburg. After initially acquiring a highly impressive art collection, the Schloss entered a period of decline during the late 1700s and 1800s as many of its works were sold or removed.

Max Reinhardt purchased the Schloss Leopoldskron in 1918 in a dismal condition and is largely credited for its revitalization. He immediately began restoring many parts of the castle, including the staircase, Great Hall, and the Marble Hall, while also creating his own additions with the Library, the Garden Theater and the Venetian Room. As a theater director, Reinhardt made great use of the castle’s features by moving audiences room-to-room alongside a performance. Reinhardt would make the Schloss Leopoldskron his own personal residence, and in 1920 he would go on to found the Salzburg Festival alongside Hugo von Hofmannsthal and Richard Strauss there. During the castle’s “Reinhardt years,” the Schloss Leopoldskron was seen as a cultural hub for theater directors, playwrights, and actors from all over the world. 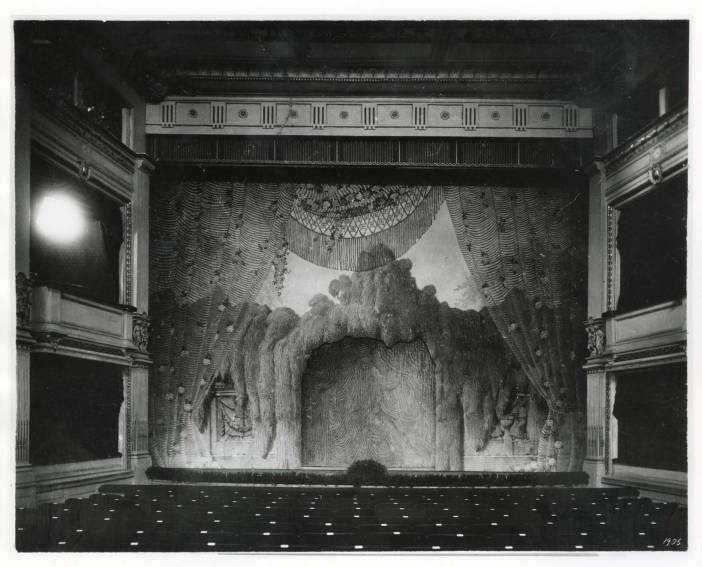 Photograph of the auditorium and stage of the Deutsches Theater in Berlin, Germany. 1905.

The Deutsches Theater zu Berlin was originally built in 1850 under the name Friedrich-Wilhelmstädtische Theater. It was not until Adolph L’Arronge assumed ownership of the theater in 1883 that he founded the Deutsches Theater with the goal of bringing classical works to the German stage. In 1894 theater direction was passed over to Otto Brahm, whose realistic and naturalist productions made the Deutsches Theater a critical success.

Max Reinhardt originally began his work in the Deutsches Theater in 1895 as an actor working under Otto Brahm, however by 1905 he had purchased and assumed direction of the theater. One year later, Reinhardt commissioned the adjoining ballroom to be rebuilt into a smaller theater with the goal of making dramatic modernist theater accessible to a wider audience in a private setting; this smaller theater became known as the Kammerspiele. Under Reinhardt, the Deutsches Theater achieved international acclaim. Except for special occasions, Reinhardt gave up direction of the theater in 1920 in order to return to Austria, where he would reside in the Schloss Leopoldskron and found the Salzburg Festival. Reinhardt’s last production at the Deutsches Theater took place on March 1, 1933 with Hugo von Hofmannsthal’s Das große Welttheater.

During the Nazi period, both the Kammerspiele and Deutsches Theater were closed by Joseph Goebbels. The theater was reopened after the war and quickly became a staple of east German theater, hosting productions by renowned theatrical figures such as Bertolt Brecht and Benno Besson. Today, the Deutsches Theater still remains as one of the most culturally significant and critically acclaimed theaters in Berlin. Photograph of ensemble performing a scene from Lysistrata directed by Max Reinhardt. Production staged at the Großes Schauspielhaus in Berlin, Germany in 1920.

The Großes Schauspielhaus in Berlin, famous for its expressionist construction designed by architect Hans Poelzig, opened in 1919 under the direction of Max Reinhardt, who would be the theater’s main director until 1920. Formally a circus house (Zirkus Schumann), the new Großes Schauspielhaus contained seating for 3200 people, helping Reinhardt realise his goal of a permanent theater for mass audiences. The theaters size and capacity allowed for poorer, working-class audiences to attend Reinhardt’s theater.

Reinhardt commissioned the construction of the Großes Schauspielhaus in 1918, celebrating its grand opening in November 1919 with a performance of Aischylos’ Oresteia. After helping to establish the Salzburg Festival in 1920, Reinhardt spent much of his time working in Austria, and he relinquished direction of the Großes Schauspielhaus in 1920, culminating with the handover of the theater to Erik Charell in 1924. During his time as theater director, Reinhardt staged performances such as Roland’s Danton, Shakespeare’s Hamlet and A Midsummer Night’s Dream, Goethe’s Faust, and Aristophanes’ Lysistrata.

After the Nazis rise to power in 1933, Reinhardt’s theaters including the Großes Schauspielhaus were requisitioned, and the modernist architecture of the Großes Schauspielhaus was denounced as “degenerate art” [entartete Kunst]. Much of the theater’s artistic features were covered up and the theater was renamed to Theater des Volkes (Theater of the People). After the Second World War, the theater was renamed Friedrichstadt-Palast Theater, which became a prominent stage in East Germany until its eventual demolition in 1988. 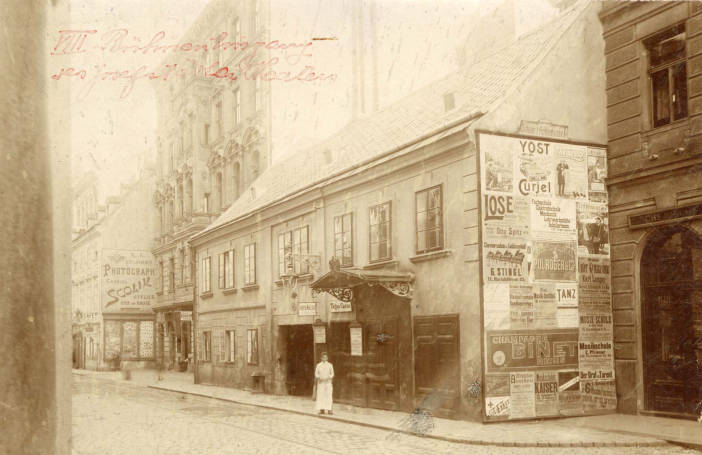 Photograph of a man standing in front of the Josefstadt Theater entrance before its reconstruction. Vienna, Austria, 1890-1900.

The Theater in der Josefstadt is one of Austria’s most renowned theaters with a rich history dating back to its founding in 1788 and including cultural figures such as Ludwig van Beethoven, Richard Wagner, and Johann Strauss I. The theater is also known for its intimate seating, creating an intensive relationship between actors and audience.

Succeeding Josef Jarno as theater director in 1924, Max Reinhardt immediately began renovating the theater in an Austrian imperial style. The “Reinhardt Era” of the Theater in der Josefstadt began on April 1, 1924 with a performance of Goldoni’s Die Diener zweier Herren. Reinhardt also staged Hugo von Hofmannsthal’s Der Schwierige later that month. During his residency at the theater, Reinhard worked with Emil Geyer from 1926-1933, Otto Preminger from 1933-1935, and Ernst Lothar from 1935-1938 as subdirectors. In 1935 Ernst Lothar bought Reinhardt’s stake in the theater, however Reinhardt’s directorial control continued until his emigration in 1938. Reinhardt’s last ever European performance took place in the Josefstadt theater in 1937 with Franz Werfel’s In einer Nacht.

After the Anschluss in 1938, many of the theater’s key figures were forced to either flee or relinquish their role in the theater. Heinz Hilpert thus succeeded Reinhardt, taking control of the Theater in der Josefstadt alongside Reinhardt’s other theaters such as the Deutsches Theater and Kammerspiel in Berlin during the Nazi period. 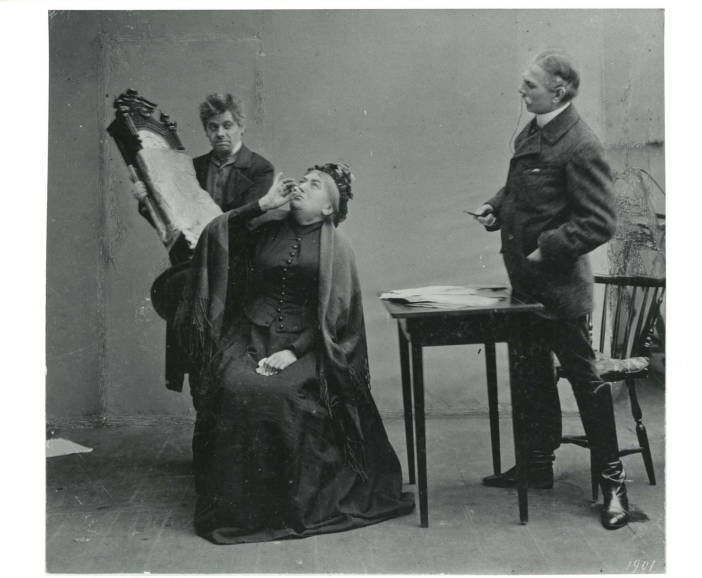 Photograph of Max Reinhardt as Wulkow alongside actress Else Lehmann in Biberpelz. Production staged at the Kleines Theater in Berlin, Germany, 1901. 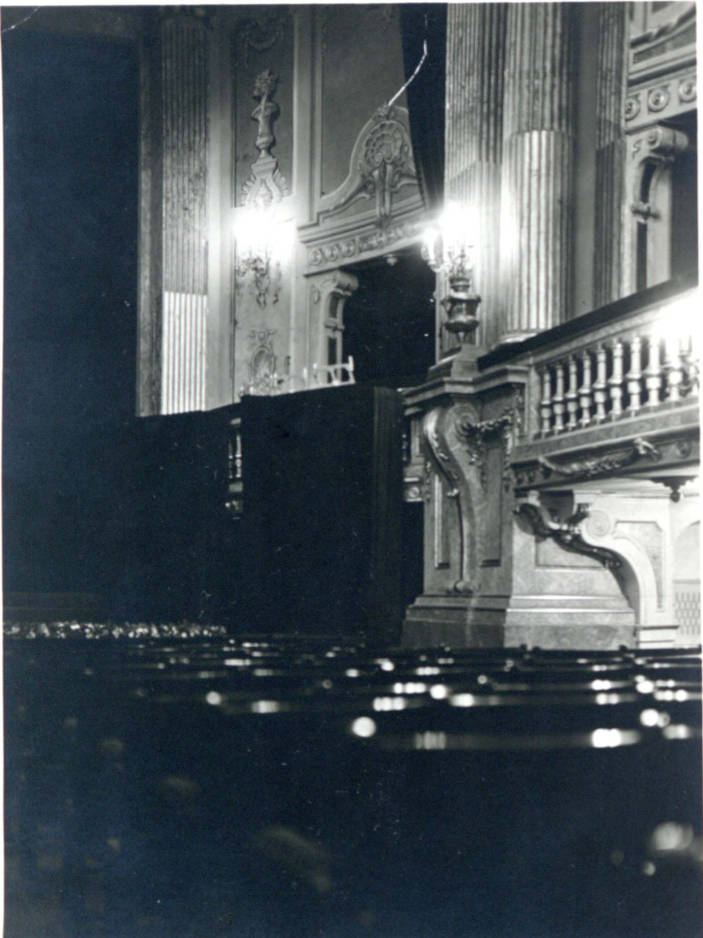 Photograph of the auditorium used by Max Reinhardt and his students during at his Vienna seminar. This theater was formerly known at the Austrian Emperor's Theater. Vienna, Austria, 1930-1940.

The Burgtheater holds the reputation as one of the world’s most important theaters. It was originally commissioned in 1741 and inaugurated in 1748. Since its opening, the theater has been home to some of the most legendary and revered cultural figures in European history. As a child in Vienna, Max Reinhardt cites the Burgtheater as the place where he “first glimpsed the light of the stage.” Later in his life, following his return to Austria in 1920s, the then-director of the Burgtheater’s theater company, Albert Heine, tried unsuccessfully to recruit Reinhardt and his company to work at the theater. Nevertheless, Reinhardt would later stage Étienne Rey’s comedy Schöne Frauen in the fall of 1922 at the Burgtheater. 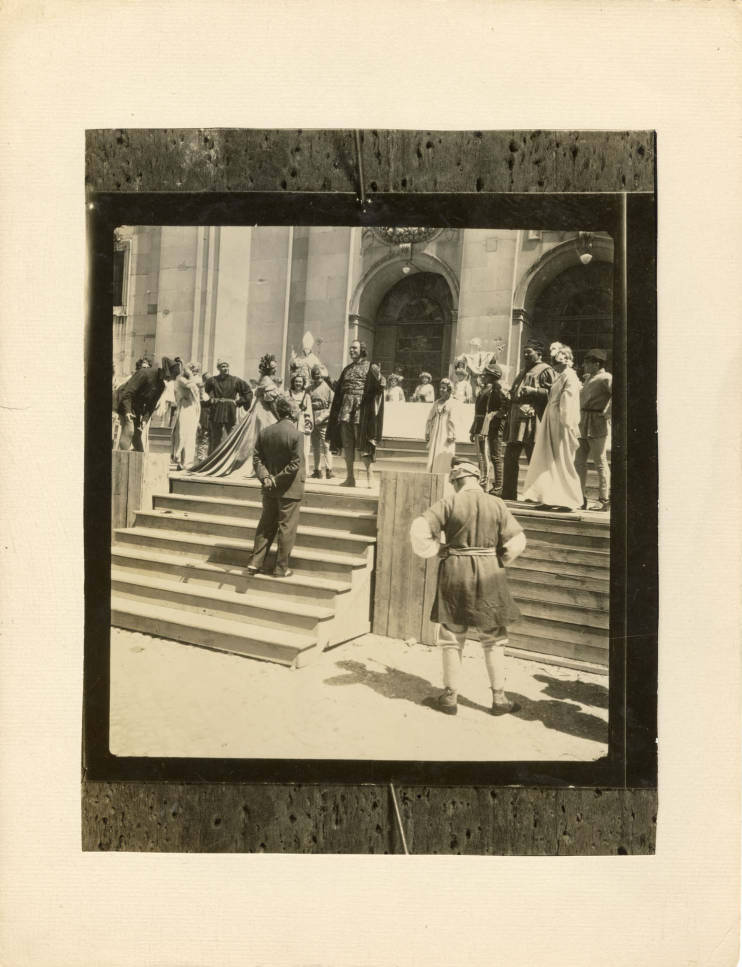 Photograph of director Max Reinhardt observing a rehearsal of Jedermann in preparation for the Salzburg Festival in 1932.

Following his return to Austria in the aftermath of the First World War in 1920, Reinhardt, alongside writer Hugo von Hofmannsthal and composer Richard Strauss, had the idea of creating a unique, open-air festival experience in the nearly fully-enclosed cathedral square of Salzburg. Given the post-war crisis and the dissolution of the Austro-Hungarian Empire, Austrian officials approved Reinhardt’s festival in hopes of bolstering tourism to aid its ailing economy.

Reinhardt celebrated the premiere of the Salzburg Festival with a legendary production of Hoffmansthal’s Jedermann on the cathedral steps on August 22, 1920. Reinhardt’s staging of Jedermann would become a staple of the festival, and was performed again in 1921 and from 1926-1937, before being banned by the Nazi regime. Beginning again in 1946, Jedermann became an annual performance of the festival to this day.

Today, the Salzburg Festival is one of the most renowned theatrical festivals in the world.